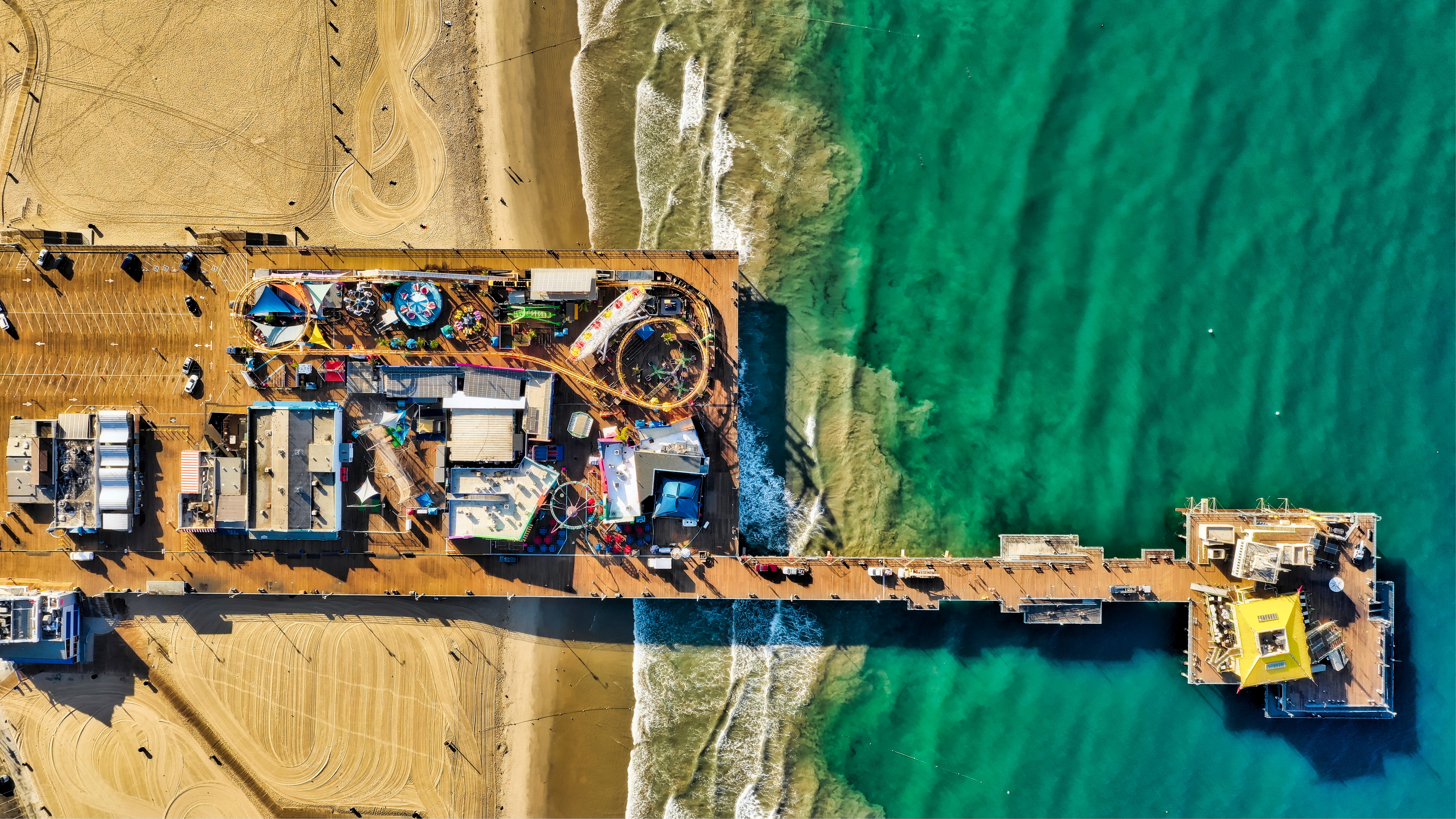 The History of the Santa Monica Pier (The 1960s to Now)

Picking up from our first blog, the Santa Monica Pier had a pretty good start; the first pier opened in 1909, the second pier – known at the Pleasure Pier – opened in 1916 and amusements came and went. A ballroom opened and thrived before closing, an illegal offshore gambling operation took place and the Pier changed hands several times before the 1960s.

By the time the next decade rolled around, the Pier was starting to fall into disrepair. Drastic actions –almost – took place, including the demolishment of the Pier. But I’m getting ahead of myself.

The Pier managed to stay alive during the decades while others disappeared; Newcomb Pier was sold to the city in 1973 when the lease ran up.

This marked the beginning of the apparent end of the Pier. The Santa Monica City Council slated the Pier for destruction to make way for a man-made island with a resort hotel. This caused such an uproar with the sleepy beach-side community that the council later rescinded the plans but the damage was done; three of the councilmen who voted to destroy the Pier were later defeated during reelections.

In 1975, the Hippodrome and carousel were designated a U.S. National Historic Landmark.

For the next several years into the 1980s, the Pier was left alone. It had been saved by the city and all seemed well.

In January and March 1983, a pair of violent storms almost obliterated all that effort. The January storm destroyed the lower deck of the pier. When repairs began in March, a second storm hit. Over 1/3 of the Pier was destroyed; a café, bait shop, rock shop and harbor patrol station were all wiped out.

In the aftermath, the city formed the nonprofit Santa Monica Pier Restoration Corporation to oversee the reconstruction and day-to-day operations for the Pier. These day-to-day operations included managing events, filming, promotions, tenants and street performers. To bring attention to the Pier during its reconstruction, “Save the Pier Week” was held in 1983 with a series of annual concerts called the Twilight Summer Concert Series. Those concerts still exist to this day.

By 1986,  most of the Pier was rebuilt and soon came new features.

In 1988, the council adopted the Santa Monica Pier Development Program, which ordered the building of a new concrete substructure to strengthen the Pier.

By 1990, the western structure of the Pier was rebuilt, and the harbor patrol station reopened along with a bait shop and restaurant. Retail, dining and entertainment attractions soon followed suit but the biggest addition was the Pacific Park Amusement Park.

On May 26, 1996, the Pacific Park opened, bringing back the first full-scale amusement park on the Pier since the 1930s, as well as the first roller coaster since the Whirlwind Dipper: The West Coaster. A swinging sea ship called the Sea Dragon, the Scrambler, the Pacific Plunger and a Ferris wheel soon opened, too.

The Ferris wheel, called the Pacific Wheel, has been a spectacular feature of the Pacific Park. The original Ferris wheel, which unveiled in November 1998, was the world’s only solar-powered Ferris wheel, the first of its kind. After 12 years, it was auctioned off in 2008 on eBay with half the proceeds donated to the Special Olympics, and it was replaced with another solar-powered wheel.

The nine-story-tall Ferris wheel received a $1 million lighting package upgrade in May 2016 for the Pacific Park’s 20th anniversary; over 174,000 LED lights were installed.

A fun fact about the Pacific Park: It is the only admission-free seaside amusement park in Los Angeles. How neat is that?

As they say, the rest is history.

The Santa Monica Pier Aquarium, which is operated by Heal the Bay, can be found below the Pier’s eastern deck. Concession stands and areas for viewing and fishing are scattered all over. Visitors can find street performers and artists all along the Pier. Shops and restaurants dot the Pier, which still holds outdoor concerts and movies.

It is amazing to think that one of the oldest wooden piers in American history not only still exists but is flourishing into the 2020s. With between six to eight million visitors annually, who knows what the future might bring for the Santa Monica Pier? Only time will tell.