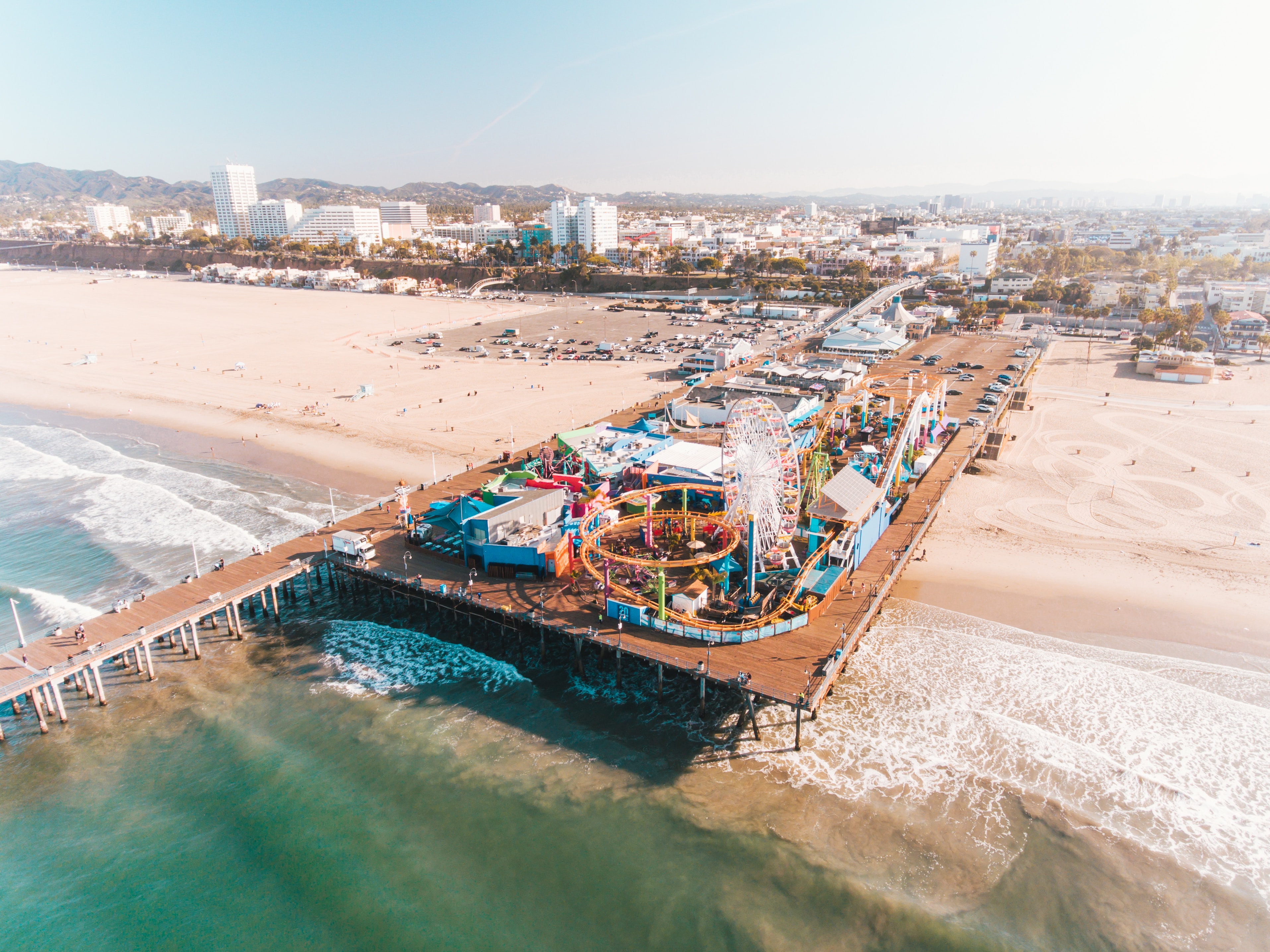 As one of the most historic landmarks in Santa Monica, it should come as no surprise that the Santa Monica Pier has a vibrant, rich history. Much like its roller coaster, the Pier has had a fluctuating presence over the past 110 years.

Since its history spans over one century, we are going to look at the Pier in two blogs with this first half focusing on the Pier from its conception in 1909 up to the end of the 1950s; there is so much to learn!

So the next time you plan a family outing or grab a quick bite at the Pier, look around and imagine yourself throughout the years at the Santa Monica Pier.

As you probably know, the Santa Monica Pier today consists of two piers that are side-by-side at the foot of Colorado Avenue. However, that was not how the Pier was originally planned.

The first pier, which is the longer, slender pier on the north side, was created by local architect Edwin H. Warner to take sewage far out to sea where it wouldn’t bother anyone; the pipeline ran under the pier. Thankfully, this practice stopped in 1928.

The 1,600-foot-long concrete pier opened on Sept. 9, 1909, after 16 months of construction. Municipal Pier was an instant hit with bands and swimming contests on its opening day. This soon grew to encompass fishing, a popular activity that exists today.

Within a few years of the Pier’s existence, plans were made to build an amusement pier next to it; amusement piers were popping up all over the coasts. Luckily for Santa Monica, famous carousel manufacturer Charles L.D. Looff, who built the first carousel on Coney Island in 1876, and his son Arthur turned their gaze to the Pier. They arrived in February 1916 and bought the land south of the Pier for development. This second pier would be known as the Pleasure Pier for almost three decades.

Looff opened the Hippodrome on June 12, 1916, which is one of the most popular attractions at the Pier today. It even became Santa Monica’s first National Historic Landmark.

A carousel, built in 1922 by the Philadelphia Toboggan Company and featuring 44 hand-carved horses, went inside the Hippodrome, which is Greek for horse racecourse. It was rebuilt in 1990.

Another amusement ride to open on March 4, 1917, was the wooden Blue Streak Racer roller coaster, which was purchased from the Wonderland Amusement Park in San Diego. The 60-foot-tall roller coaster had 3,600 feet of track.

The Whip, merry-go-rounds, Wurlitzer organs, bowling and billiards rooms and a funhouse also opened on the Pleasure Pier.

Unfortunately, Looff died in 1918. His family continued to run the Pleasure Pier until 1923 when Arthur sold it to the Santa Monica Amusement Company. The company’s goal was to expand the Pleasure Pier’s thrill rides.

The Revival of the Pleasure Pier

The first step was to remove the Blue Streak Racer and replace it with the Whirlwind Dipper in 1924. The 80-foot-tall roller coaster was known for its twists and turns.

This was also when the La Monica Ballroom emerged.

The ballroom opened on July 23, 1924. It was designed by T.H. Eslick to incorporate a Spanish façade and French Renaissance interior. The 15,000-square-foot ballroom was made to look like it was floating above the sea.

The revival didn’t last long, as the Great Depression reared its ugly head in late 1929. The amusement park facilities closed down, and attractions were sold off or demolished. The ballroom remained, but Pleasure Pier became a shell of its former self.

By the early 1930s, the harbor became a breakwater and yacht harbor. In 1933, the Santa Monica Yacht Harbor was created, and yachts, fishing boats and even a cruise liner to the Catalina could be found in the harbor.

A notorious side story is that of mobster Tony Cornero who, up until 1939, ran illegal offshore gambling operations. Water taxis would bring people from the pier to his boats to illegally gamble. His flagship “The Rex” was raided in 1939 during the Battle of Santa Monica Bay. According to legends, Cornero surrendered after three days because he needed a haircut.

If you were ever curious why Santa Monica was also connected with the bodybuilder craze, it is because famous bodybuilders Jack LaLanne and Joe Gold of Gold’s Gym would often work out on the beach during the 1930s.

During the 1940s and 50s, several events happened that briefly put the Pier back on the map. The famous neon sign that still exists at the top of the Pier’s ramp was installed by the Santa Monica Pier Businessmen’s Association to celebrate the opening of the newly-built ramp.

The Pier docked military boats and personnel during World War II, and the ballroom sheltered troops.

Walter Newcomb, who was managing the Pleasure Pier at the time, purchased it in 1943; Pleasure Pier became known as Newcomb Pier. Morris “Pops” Gordon’s sons George and Eugene purchased and ran the Pier’s arcade, making Playland Arcade the Pier’s longest-running enterprise. Walter Newcomb died in 1948, and his wife ran the park until 1953 when it was taken over by the city and leased to a private operator.

At the La Monica Ballroom, country music star Spade Colley broadcasted his weekly TV show in the ballroom from 1948 to 1954. Hollywood Autocare opened with 100 famous and unusual cars in the summer of 1955. The ballroom transformed into a roller skating rink in 1958 and ran until 1962, a year before it was demolished in 1963.

It was during this time that the Pier began to venture into the darker half of its history by almost being demolished.

Visit George’s Burger next month to continue our journey into the next 60 years of the Santa Monica Pier. While you are waiting, stop by for one of our delicious burgers!