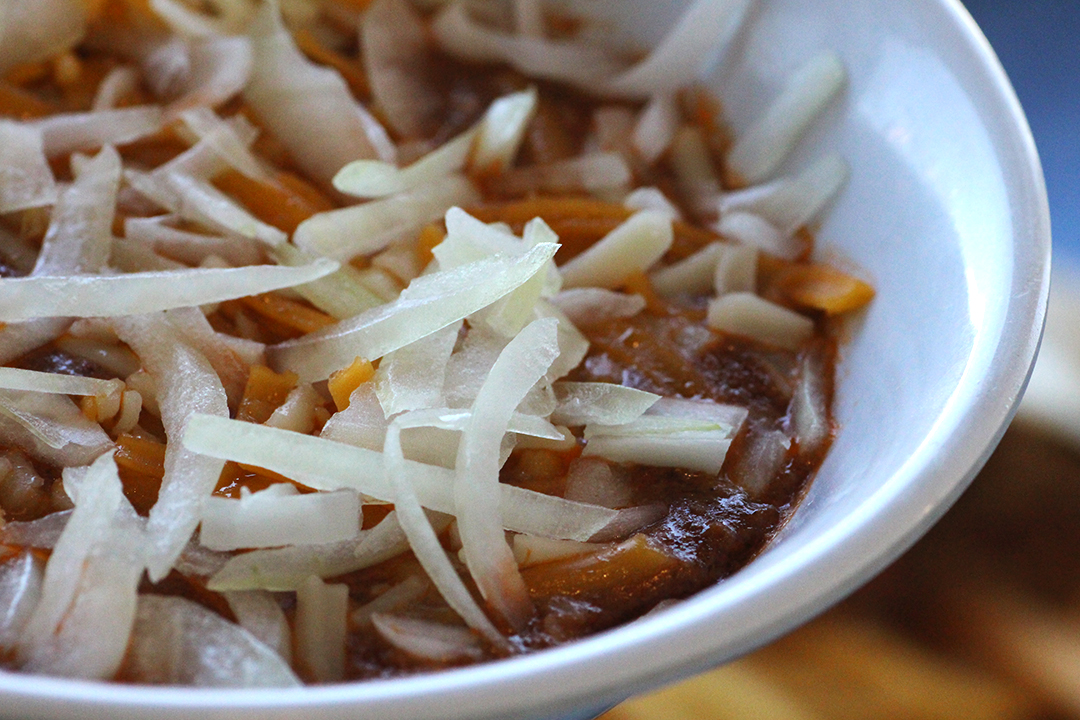 Chili: From Stew to Savory Topping

Chili is more than just your favorite topping and a staple of county fair cook-offs, and for good reason! The dish we’re referring to is chili con carne and at its base, it consists of chili peppers or powder, meat, tomatoes, and beans (though the last two can be considered optional). The dish itself hasn’t been around all that long compared to the rest of human history, but it has made enough of an impact to become a part of Americana. These four simple ingredients have quite a history to them when finally combined, and one that George’s Burgers is happy to explore (and serve, obviously). Let’s take a look at the beginning!

Our favorite meat and pepper dish finds its origins in a place that you probably expected: Texas—particularly San Antonio. In the 1850s, the poorest residents relied on inexpensive and easy ways to make food that would sustain themselves throughout the long workdays. This is where we get the image of “Chili Queens,” who were working-class women of Tejana and Mexican descent.

The original recipe called for dried beef, suet, dried chili peppers, and salt to be pounded into brick form and left to dry. When one brick of goodness was finished drying, it merely had to be put into a pot to boil and stew. This recipe was a big hit among cowboys who needed sustenance over long trips on the trails of Western America. However, this amazing recipe would soon find its way to other parts of America, quickly becoming a staple of the national diet.

With chili becoming more and more popular thanks to the services of the chili queens supplying local parlors and Texan armies, more specialized restaurants were opening up all across Southern Texas. Soon, these queens would have their own marketplace locations, which sold their inexpensive stew – these were called Chili Joints. Later in the century, the Texas-based stew would finally make its way up north with the 1883 Columbian Exposition in Chicago, where it became a huge hit at The San Antonio Chili Stand. From here, this Texas stew expanded even further into places like Cincinnati and Springfield, Illinois.

Back in Texas, family-run Chili Parlors/Joints became even more prominent, with nomadic Texans opening up said parlors in other neighboring states. The advent of chili powder made this dish even more prominent as Texas-specific chili was no longer required to make the dish. Some of the nation’s most popular chili-based restaurants opened in this era, which also encompasses the early 1900s. With the beloved stew having become a staple of the American diet, it would soon find itself a new use—as a topping.

Cook-offs and recipe debates aside, chili’s impact on Americana can be felt in the most American of foods—Hot dogs and burgers. The chili dog, in particular, started popping up in the 1910s and cemented itself as a staple of hot dog stands everywhere. The Texas Hot and the Coney Island Hot Dog were some of the first examples of such a mix, and remain popular to this day.

When it comes to sides, our favorite topping also managed to add itself to French fries and macaroni and cheese, giving way for chili cheese fries (sometimes also known as Coney Island Fries) or chili mac. The latter, by the way, has even become a staple of the U.S. military as it’s a popular MRE (Meal, Ready-to-Eat).

Be it on a hot dog, in a burger, or simply on its own, George’s Burgers has chili on standby to add to your favorite meal! You don’t have to go all the way to Texas to get yourself a good bowl of classic Americana, just swing by our location in Santa Monica and get as much as you want! Follow us on Facebook and Instagram for more mouth-watering images!